Researching Music & Musicians in Our Collections

Music has been a feature of Judaism and Jewish culture since biblical times. Jewish music encompasses many forms—there is liturgical and secular music; songs from the Ashkenazi, Sephardic, and Mizrachi traditions; Yiddish theater, klezmer bands, Israeli folk music, and more. American Jews—including such big names as Irving Berlin, Leonard Bernstein, Bob Dylan, Paul Simon, Barbra Streisand, Bette Midler, and Billy Joel—have filled big roles in all genres of music, including classical, show tunes, pop, rock, and folk. In Boston and New England, organizations such as the Jewish Arts Collaborative, with its Boston Jewish Music Festival, and local synagogues, which often have their own glee clubs or choirs, continue to keep the traditions of Jewish music alive.

Below are the JHC’s archival collections related to music and musicians. Click on a title to see an overview of the collection, view the collection’s finding aid (guide to the collection and its contents), and, if applicable, view the digitized collection on our Digital Library & Archives.

Please note: most of our digitized collections require the creation of a free guest user account to access. Click here for instructions on how to create a free account, as well as tips for navigating the Digital Library & Archives.

Edward Bernard was a composer in the Boston area. He also wrote several pamphlets on sociology, religion, politics and music, as well as an unpublished manuscript of a sociological novel entitled, "Maxie the Genius." This collection contains Edward Bernard's musical compositions and writings, including an unpublished manuscript, "Maxie the Genius," and letters to editors of local newspapers and Nathan Kaganoff, former library director of the American Jewish Historical Society. In addition, there are several self-published pamphlets on topics ranging from sociology to music included in this collection.

Percy Brand (1908-1985) was a violinist by profession and Holocaust survivor. Born in Liepaja, Latvia on April 2, 1908, he began playing violin at the age of ten. In 1941, when the Germans took control of Latvia and other Baltic countries, Brand was concertmaster of the Riga Latvian Symphony Orchestra. After the SS Einsatzgruppen units occupying Latvia killed his first wife and two children, Brand was sent to the Buchenwald concentration camp in Germany. Playing the violin saved his life during the Holocaust. Brand and his second wife, Gertrude, immigrated to the United States and moved to Boston in 1949, where Brand became a well-known radio and television performer. He died on August 8, 1985, at the age of 77. This collection contains papers and photographs of Percy Brand, chronicling his professional life as a violinist in Boston. Mainly composed of programs and newspaper articles of his performances, the collection has miscellaneous files with name cards, memos, correspondence, and Brand's artwork in pencil, crayon, and watercolor. Also included is the oversized music stand he used when he performed.

Mary Wolfman Epstein was a singer, playwright, director, vocal teacher, and talent manager in the Boston area. Epstein worked with many Jewish and secular organizations, and she co-founded the New England Jewish Music Forum. She wrote over 30 original musicals, most of which were based on Jewish themes or individuals. This collection contains news clippings, photographs, recordings, correspondence, sheet music, scripts, and performance programs.

Max and Anna Kaplan immigrated to the United States from Russia between 1899 and 1902, settling in the Boston area. The bulk of the collection focuses on the activities of their sons Richard S. Kaplan, an attorney, judge, and author in Gary, Indiana, and Louis Kaplan (known professionally as Lou Carter), a jazz drummer and band leader. The collection contains official documents, including Max and Anna’s naturalization papers, news clippings concerning the two brothers, and photographs, primarily of the Carter orchestra.

Samuel Moshcovitz was born in Russia in 1907 and immigrated to the United States, where he attended college and became an accountant. He was active in several Jewish organizations, including Brandeis University and Beth Israel Hospital, until his death in 1993. The collection contains a collection of sheet music from the early to mid-twentieth century, along with correspondence from lawmakers in response to letters from Moshcovitz regarding United States policy in the Middle East. Another folder relates to copies of a commencement address delivered by Senator Daniel Inouye and distributed by Moshcovitz to lawmakers and Jewish and news organizations.

The New England Jewish Music Forum was a non-profit organization created in 1958 committed to presenting performances of Jewish music in the Boston area. The organization closed its doors in 1990 after thirty-two years due to financial hardship and low membership. The collection includes meeting minutes, by-laws, and finances, as well as photographs of forum events, performance programs and brochures, correspondence, newspaper clippings, and concert files.

The Evelyn B. and Janot S. Roskin collection contains items relating to the Roskin, Borofsky, and Grosbayne families, with special focus on the musical contributions of Evelyn B. (née Borofsky) and Janot S. Roskin, which make up the bulk of the collection. A smaller portion of the collection comes from the Borofsky and Grosbayne families, including Jacob and Ida Borofsky, Evelyn's sister, Edith Borofsky and her husband, Mitchell Grosbayne and his brother, Benjamin. The collection includes publicity photographs, clippings, sheet music, sound recordings, and musical compositions.

Morton Shanok was Cantor at Temple Beth El in Lynn (and later Swampscott) for thirty-two years and, after his retirement, High Holiday Cantor at Temple B’nai Abraham and Religious Cultural Coordinator at the Jewish Rehabilitation Center for Aged. He served in the U.S. Army as assistant army chaplain from 1942-1945. He was a founding member of the Cantors Assembly and helped write the curriculum at the H.L. Miller Cantorial School and College of Jewish Music of the Jewish Theological Seminary. The material in the collection consists of photographs, correspondence, and documents primarily related to music and Cantor Shanok’s position at Temple Beth El.

The Yiddish Phonograph Record Collection consists of 57 records, including three named compilation albums of cantorial and holiday music. The records contain a variety of types of music, including classical, instrumental, folk songs, opera, cantorial music, and Yiddish interpretations of popular songs of the day. A few records also contain Yiddish storytelling and monologues from theater performances, and some are in languages other than Yiddish, including Hebrew, English, and Russian. 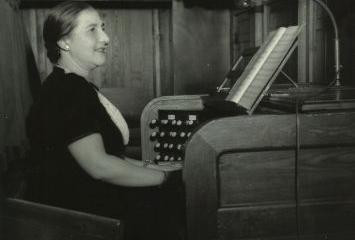